For 35 years he has been known as the Communication Arts and Skills Scripting Clinic Czar.  The Scripting Clinics are incorporated in such internationally famous programs known as OneBankism.  OneBankism (also known as “OneTeam”) is the Holy Grail of Commonwealth Bank of Australia, ASB, National Australian Bank, Wells Fargo (known as “One Wells”), Bank of Hawaii, and BB&T. OneBankism converts silos into interdivisional primed and pre-positioned cross-referrals.

Perhaps of all the courseware for which he’s best known, none is more important than Breakthrough Behavioral Embedding (BBE), which was launched in 2007 and became the new brand of CBMG.

His most current program that has received international recognition is entitled Structured Time and Workflow Management (STWM).  STWM literally increases the amount of time necessary to meet deadlines and leverage human resources such that downsizing and/or hiring freezes are no longer an un-resolvable challenge for meeting revenue and quality control goals and objectives.

He has taught top executives at successful companies around the world and is a world leader in bringing sales and service learning to many of the world’s leading banks.  He currently consults to top governments on education, including countries in the Middle East.

Before founding Cohen Brown, he was a management consultant to Fortune 500 and other companies.

His remarkable career is evidence of a man with an appetite for an unusual variety of pursuits and a golden touch with all. He began as a teenager, selling door-to-door in the Bronx neighborhood where he was born.  Later he became business manager to Hollywood stars and entertainers, at one point running the second largest business management company in the country.  He wrote a #1 song Tan Shoes and Pink Shoelaces and has written three operas.

Having helped his celebrity clients become affluent and seen the need for financial services for them, Mr. Brown founded two banks and started a heavy equipment leasing business and a high-speed boat business.

Mr. Brown’s book, Time Bandits Solutions:  Recovering Stolen Time You Never Knew You Had (“TBS”), is soon to be published on November 1st  This self-help book was written based on the popular demand made by the large number of STWM participants.  TBS will address a solution for unwanted, unneeded and unproductive interruptions for not only the financial services industries, but everyone including professionals, students, and educators.  It was his varied and high-pressured career that forced Brown to become his own time management expert.  Juggling so many responsibilities, he found himself so prone to interruptions that his creativity was jeopardized and his management abilities compromised.  He taught himself the lessons in his book, then taught them to his colleagues and clients, and finally captured them in a book for the good of his readers.

As a youngster he worked at releasing bronco bulls and bronco quarter horses from the chutes during rodeos at Madison Square Garden.  He did this for the thrill of bearing near Roy Rogers and Dale Evans.  What he didn’t realize was that eventually he would become Roy and Dale’s business manager and eventual partner.  He became an elite horseman, polo player, and owner of many fine horses.  He collects art from around the world which fills his homes in Malibu, California, and Hawaii.  He and his wife have two grown children and one grandchild. 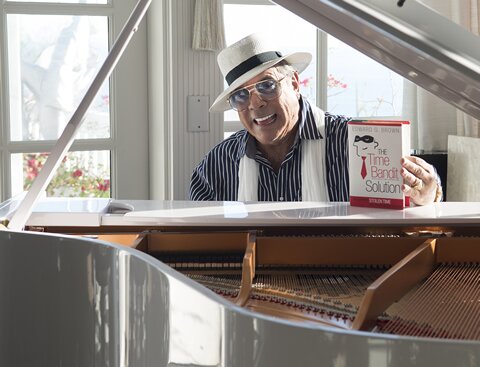 I wrote this book to save other peoples lives just as the learning's saved my life. The fleetness of time was stealing my joy and I had to find a way to make the rest of my life —my remaining years more fruitful, less frantic, and more satisfying.

How is your book different than others out in the market? What needs does your book meet that makes it a must for someone to buy?

This book is not just a self help book but an actual course in how to convert your Time Bandits so that you gain control of your time and life.

If you’ve tried other ways to get organized and failed, this book will thrill you by showing you that the solution is totally within you. And when you find it, you won’t just solve your own time management issues, you’ll change the way you live.

Is the book based on your own life in any way?

The lessons in The Time Bandits Solution can change your life as it did for myself. I am an entrepreneur and as a result, I was all over the map and had commitments to keep with my partners and businesses. Because I ran my companies lean, I wore a lot of hats and the demands were enormous. I found years, months, days and hours slipping away in my life yet I had not accomplished all that I wanted to do. I was desperate for more time.

The principles of this book are born out of desire to live a stress free happy life. If you utilize the principles, you can gain 40-60% more time which can be used to do the things you love to do. The learnings are applicable to both your personal and professional life.